Home Events at the farm Around Torricella Chianti trips 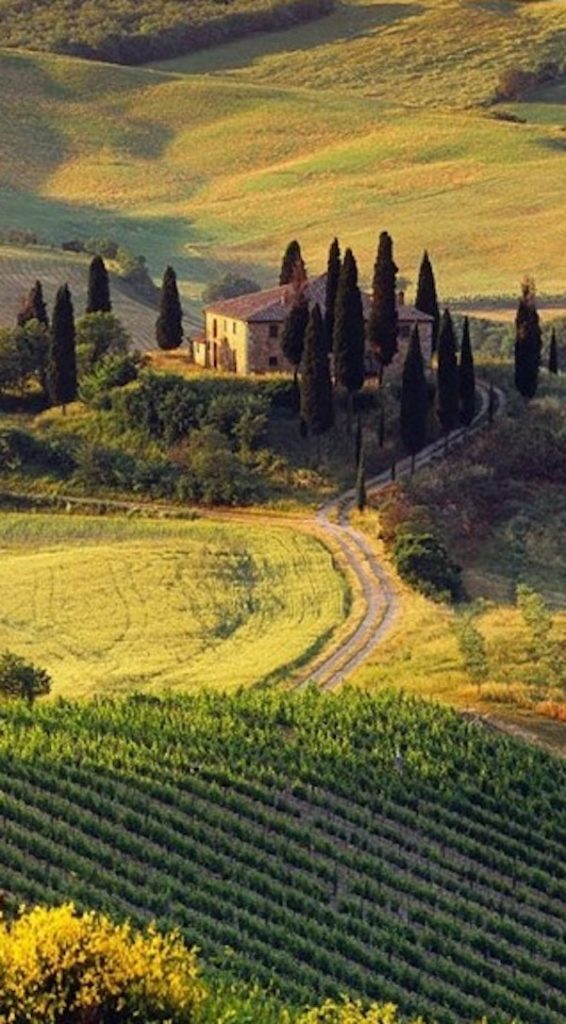 Tuscany is located in central Italy. The Chianti area is situated in the region’s centre, between the cities of Florence, Siena and Arezzo. A delightful hilly landscape, rich in diversity – no less than the famous cities that surround it. The name “Chianti”, synonymous around the world with its prestigious wine, is however currently used to indicate areas of land bounded otherwise. It is therefore necessary to make some things a little more clearer.

From a geographic point of view, Chianti is an area of medium to high hills that extends for almost twenty kilometres (roughly going north-south-southeast). Its highest point is Monte San Michele, 893 metres high. Five rivers run through the area and its valleys: Pesa, Greve, Ombrone, Staggia and Arbia.

The ancient land of Chianti, once Etruscan and then Roman, rich with woods, water and game, almost looked more mountainous than hilly, although with modest peaks. Once off the main communication routes, it was not very accessible, and this – to some extent – sheltered the area from the great barbarian invasions after the fall of the Roman Empire.

However, from the middle Ages to the Renaissance era, it was a continuous battleground for skirmishes between the powerful towns of Siena and Florence, who contended the land. The many castles and fortified villages that we still see today are proof of such battles. Many of them are also found at short distances from each other, such was the need to control the enemy during these feudal wars.

Roads in the Chianti region are now good and, fortunately, do not invite cars to speed, but to enjoy the scenery via a series of ups and downs through the hills. Florence is a great place to start the SS 222 Nuova Chiantigiana from Ponte to Ema. If leaving from Siena, take the Vecchia Chiantigiana – avoiding the highway to Florence – and then rejoin the Nuova Chiantigiana road.

Internal connections with smaller towns favour the tourist to discover the area, stimulating the surprise and the desire to stop.  Saying which Chianti town to visit would be doing wrong to hundreds of others, but we cannot leave out Badia a Passignano, beautiful and ancient seat of the League of Chianti, easily reachable from the Florence-Siena road, or the tiny hamlet of Volpaia, so suggestive as to seem a film set, and the mighty, historic town of Brolio, former residence of the Grand Barone Ricasoli, the inventor of modern winemaking.

How to get to Chianti:

There are two international airports in Tuscany: Florence’s Amerigo Vespucci and Pisa’s Galileo Galilei, the latter well connected to other airports in Italy and Europe. Pisa airport also has a railway terminal* practically adjacent to the terminal, from which you can reach the train stations of Pisa Centrale and Firenze Santa Maria Novella. It is of course possible to rent a car at both airports, but we would advise to book before arriving. You will save yourself long queues at the rental counter as well as getting much better deals. *Please note that the train station at Pisa’s airport is undergoing main restructuring work at present and will not be finished until late 2015. A bus service (PisaMover Bus) is currently available to connect you to Pisa’s main train terminal, leaving every 10 minutes from outside the airport (the journey takes 8 minutes). Tickets are available from the airport’s information office (on the right as you exit Arrivals) or on the bus itself.

Train stations are found in all provincial cities and in many smaller towns across Tuscany (the latter are probably better reached by bus though), but Florence is the most important railway junction in the region and one of the main stops on the line connecting Milan to Naples (from here you would catch the fast trains – Frecciarossa – to Rome). Pisa, on the other hand, is the most important stop along the Genoa-Rome line (from here you would catch trains to the Riviera in Liguria).

Florence, as it is for trains, is the coach hub of Tuscany. The bus terminus is at the train station of Santa Maria Novella: from here you can reach the other Tuscan cities and most smaller towns. You can also reach Siena from Rome and Milan with the SENA services. The coaches are comfortable enough to visit the region’s interior, but they rarely travel at night.

Two highways allow you to reach Tuscany: the E35-A1 motorway (Milan-Naples, passing from Florence) and the A12 (Genoa-Livorno). We would recommend you not to travel on the A1, near Florence, on weekdays between 8am and 10am and between 5pm and 8pm: the highway is the city’s main ring road and traffic congestions is guaranteed.
To reach the Chianti area, you can take the Firenze – Pisa – Livorno super-road or the Firenze – Siena motorway. You can also take any of the provincial roads (indicated as S.S.), which probably better all together. As a matter of fact, as we mentioned before, car or bike allow a thorough appraisal of the area: the countryside offers amazing and beautiful landscapes, and its small towns are unique and welcoming.

Tuscany, and Chianti in particular, is one of the regions preferred by motorbike enthusiasts. Directions to the area would be same as for cars. If, however, you wish to take alternate routes, off the beaten path…well, you will be spoilt for choice!

This website uses cookies to improve your experience while you navigate through the website. Out of these, the cookies that are categorized as necessary are stored on your browser as they are essential for the working of basic functionalities of the website. We also use third-party cookies that help us analyze and understand how you use this website. These cookies will be stored in your browser only with your consent. You also have the option to opt-out of these cookies. But opting out of some of these cookies may affect your browsing experience.
Necessary Always Enabled
Necessary cookies are absolutely essential for the website to function properly. This category only includes cookies that ensures basic functionalities and security features of the website. These cookies do not store any personal information.
Non-necessary
Any cookies that may not be particularly necessary for the website to function and is used specifically to collect user personal data via analytics, ads, other embedded contents are termed as non-necessary cookies. It is mandatory to procure user consent prior to running these cookies on your website.
SAVE & ACCEPT