Home Events at the farm Around Torricella Montespertoli and its surroundings

Montespertoli and its surroundings 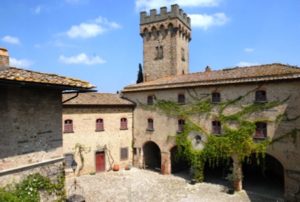 Montespertoli is just 20 km from Florence and 30 km from San Gimignano. On one side we have the valley that leads to the river Pesa (Val di Pesa), on the other the valley of the river Elsa (Val d’Elsa). The countryside surrounding the town offers postcard landscapes: a succession of rolling hills covered with vineyards and olive trees, with unpaved roads lined with rows of cypress trees.
Montespertoli is located along the “Via Volterrana” that connects to the Via Francigena near Certaldo.  Montespertoli is one of the main areas of wine production and olive oil in Tuscany and is therefore a predominantly agricultural area. Every year at the end of May the city hosts the “Mostra del Chianti”, a whole week dedicated to wine.
Montespertoli is also known for its truffles and, together with the nearby Montaione, is called “Truffle City.” The area is also famous for the production of glass and terracotta.  During the day the town is pretty quiet, almost sleepy, but if you go beyond appearances you’ll find a treasure in every corner!

The Bibbione Castle(Castello di Bibbione) was built by the Cadolingi family of Montecascioli before the year 1000. It was then purchased by the Buondelmonti family in the twelfth century, before passing to the Machiavelli family in the sixteenth century and utilised as a hunting reserve. The property still belongs to the Rangoni Machiavelli family, who oversaw its restoration in 1985. The estate’s old farmhouses are now used as an Agriturismo, a spa and a farm of about one hundred hectares, complete with its own with vineyards and olive groves.

Between the twelfth and the sixteenth century, the Gabbiano Castle (Castello di Gabbiano), abelonged to two important Florentine families: the Bardi first and the Soderini after. When the latter were forced to leave Florence, as a result of disagreements with the powerful Medici family, the resort lay abandoned for a time, only to rise again in the seventeenth century, with the return of the same family. Today you can stay in the castle’s rooms or in a nearby sixteenth-century farm. The estate also stands out for its wine production (Chianti, Sangiovese, Merlot).

The Castle of Pergolato(Castello di Pergolato), hich was also owned by Buondelmonti family (as well as the Montefiridolfi and Fabbrica castles, united into a single complex to defend the territory of San Casciano), was transformed into a Renaissance villa during the sixteenth century, before undergoing several changes of ownership. Today it can accommodate 15-20 people and features a swimming pool within its large park.

The Castle of Montefiridolfi(Castello di Montefiridolfi), which is accessed via a characteristic Tuscan alley of cypresses, belonged to the Buondelmonti family since 1015. In the fifteenth century it was used as a munitions depot, but was later transformed into a country house with attached farm. Inside there are two courtyards, each of which boasts an original artesian well.

The Palagio Castle(Castello Il Palagio), at Mercatale, belonged to the family Canigiani until the end of the seventeenth century, when it was ceded to the Baroni Miniati family and transformed into a villa. Today it has neo-medieval look, thanks to the restoration work carried from 1910 by the architect Giuseppe Castellucci of Arezzo. Today Il Palagio is a working farm specialising in the production of wine and olive oil, offering areas for weddings, receptions and theme parties.

Once finished with the castles’ itinerary, another historically interesting location is Casa Machiavelli, better known as the Albergaccio, in Sant’Andrea in Percussina. The writer took refuge in this particular villa (which still belongs to the family) in 1512, after being exiled from Florence after the return of the Medici. Here he conceived his perhaps most significant piece of work: ‘The Prince”..